It was a very spirited townhall meeting. The sharing was made by the 172 participants from Guimbal, San Enrique, and Cabatuan . The members of the Movement for Good Governance (MGG) only discussed the criteria of Effective Leadership, Ethical Character, and Empowering Characteristics.

One voter said his business would flourish under a Duterte presidency. Everybody laughed when he mentioned that he has funeral parlor. Another voter stood up and said that they should all support Roxas, an Ilonggo like himself. He added that he has the highest respect for his integrity and described those who maligned him as saboteurs. A supporter for Binay said that he likes the free cakes, free movies, and free accommodations that he provides. A Poe supporter said that under P’noy, we have the 4P’s; under BInay, the 5P’s, and under Poe, we will have the 2P’s.

From the very first time, it was evident that Roxas is the candidate of the Ilonggos. He got 73 % of their votes. After the meeting, 87 percent voted for him.

The hardcore of Duterte remained at 6%, Poe at 4% and Binay and Santiago both at 1%.

It was almost like the Vice Presidential debates. There was cheering and booing. The 228 participants to the townhall meeting that was held in Bahay ng Mabuting Pastol in Tagaytay City on April 9 were young mothers, students, religious leaders, and senior citizens. It was sponsored by PPCRV volunteers.

Prof. Monsod discussed the findings of her study where corruption and dynasties were the major culprits why the Philippines ended up in the bottom of Asian countries. After her discussion, a voter stood to say that he supports Binay. He does not believe that he is corrupt and says that all the allegations against him are part of political persecution. A mother stood up and said her vote also goes to Binay because he will make the 4 Ps into 5 P’s. An elderly person who used to live in Makati gave an opposing vote and shared stories about the Binary wealth.

A student stood up to declare his support for Poe because she represents change. A village leader stressed the need for strong leadership so that laws can be enforced well and citizens need to be disciplined. A Roxas admirer explained that her vote goes for him because of his integrity and experience in public service. The failure of government to respond effectively to the needs of the Tacloban resident was raised again and blamed on Roxas.

Atty. Monsod was asked to explain the citizenship issue against Poe and he explained the provisions of the Constitution. Atty. Monsod expressed hope that all the Presidential candidates would explain their platform on social reforms. He said that the promise of government to alleviate the plight of the poor has not been fulfilled despite the passage of 30 years.

Robredo was a favorite among the participants. Almost one-half of them chose her even before the discussions. After the meeting, she was preferred by 6 out of 10 voters.

Roxas got most of the votes among the Presidentiables, 29% during the pre-voting and 44% after. It was clear however that those who chose Poe were loyal. The percentage of voters who chose her remained 23% during the pre-vote and 22% during the post-vote. Those who preferred Binay represented 14% of the voters, down from 18%. And for Duterte, the preference slightly moved downward from 21% to 17%.

The Movement for Good Governance (MGG) with its Chairman Prof. Solita Monsod has been using a scorecard since 2009. The qualifications of candidates are assessed based on three criteria: efficiency, empowering characteristics, and ethical character. A five-point system is used:

Assessment is based on facts based on written records of the candidate. Then, voters are asked to explain their choices, share stories, ask questions, and engage in friendly debates among themselves.

In a townhall meeting with the household staff in Forbes Park, a Binay supporter said her children enjoyed scholarships. A Duterte advocate in BF subdivision shared how his candidate helps the Lumads. Another supporter in PANA mentioned the need to impose discipline Duterte style. An admirer of Santiago in the same townhall admired the bright mind of the Senator. A religious shared how Senator Poe supported their anti- poverty programs.

The voters share their reservations on the candidates as well. A mother said that having a bully like Duterte as President will not serve as a good model for children. A participant from Tagaytay was apprehensive about the Poe-Cojuangco connection and how it seems that her decisions are based on convenience. The common issues raised against Binay are the allegations of corruption . For Roxas, it is how government handled the rehabilitation of Tacloban. The health of Santiago and Duterte are part of the discussions. A senior citizen said he was dismayed when Roxas gave up his candidacy for the Presidency in 2009.

Voters ask to be clarified on the constitutional provisions on candidates’ qualifications. They are ably explained by Atty. Christian Monsod, former COMELEC Chairman and Delegate to the 1986 Constitutional Convention. He shares his insights on major issues such as the rule of law and stresses the need to discuss platforms of candidates on social justice and the concerns of the poor.

Voting is held prior and after a townhall meeting. In all the townhall meetings, voters changed their preferences. The only constant was the preference for Leni Robredo as Vice President even during the first vote. Voters expressed a preference for Roxas in 4 townhall meetings with a slight margin over Poe. In the Malolos townhall, Poe was the preference of the young volunteers during the pre-voting. In the PANA meeting and that which was held with the clients of a commercial bank, the preferred choice was Duterte. After the townhall, Roxas consistently became the top choice with a significant lead over the others.

In the case of local candidates, Pena was the choice for the mayoralty post in Makati and his lead widened after the townhall meeting. Voters chose J dela Cruz for Governor of Bulacan and garnered 73% of the votes.

One voter summed up why he changed his choices in a townhall at PANA. He said, “I cannot unhear what I heard.”

Results of the Townhall Meetings

The Movement for Good Governance (MGG) led by its Chair Prof. Winnie Monsod organized several townhall meetings in Tagaytay, Bulacan, Dagupan City, Obando, Bulacan, a commercial bank, and the exclusive villages in Makati. The Tagaytay meeting was participated in by priests who are alumni of “Tahanan ng Mabuting Pastol.” PPCRV volunteers took part in the Bulacan meeting while the Dagupan meeting was organized by Bishop Soc. Villegas. Drivers and members of the household staff from exclusive villages in Makati participated in the townhall meeting.

The participants described the townhall meeting as the first of its kind. The meeting started with pre-voting. Participants cast their votes on the candidates for President, Vice President, and, Mayor. They were given chips which they placed inside a container that bore the name of the candidates. Thereafter, they discussed the characteristics of the candidates that demonstrate their “Effectiveness as a Leader”, “Empowering Leadership”, and “Ethical Character”. The participants freely exchanged their ideas and experiences using the scorecard that MGG prepared.

The townhall meeting ended with another round of voting. A visible change was noticeable which show that information can be transformative and empowering. Choices of voters change when they are given the chance to be informed and to participate in debates.

The results of the pre-and post voting are as follows:

No post-voting was made for the candidates for the vice-president because of the lack of time. 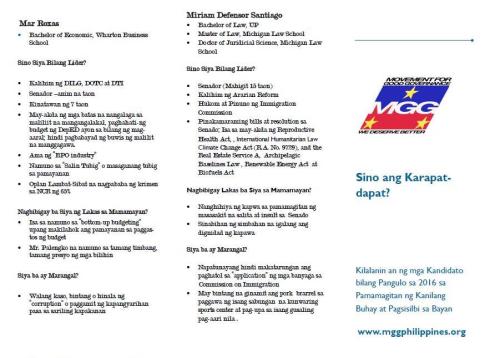 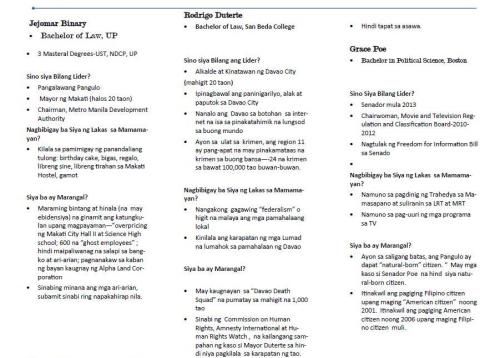 Condensed information on the Presidential candidates is available for download here. The briefer can be printed back-to-back on a single sheet and folded into three columns, for easy distribution at townhall meetings.

For more detailed candidate information, please visit our Candidate Information 2016 page, which a summary of comparative information on the candidates for President and Vice President according to the Effective, Empowering, and Ethical criteria in our Scorecard.